Madonna and Child with St. Anne, By Caravaggio 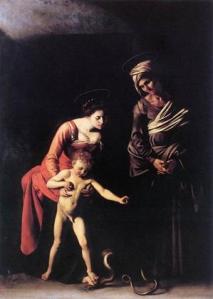 Caravaggio was a painter trained in Milan who lived an infamous life and found himself in multiple brawls and stirred up controversy through his paintings.  His infamous nature eventually led to a warrant for his death sent by the Pope.  Although Caravaggio lived a notorious life, he greatly influenced the art culture with his unique techniques and style.  In his painting “Madonna and Child with St. Anne”, Caravaggio showed his unique style of Tenebrism and disregarded and controversy it would cause.

Caravaggio began his artist career in 1600 as the many churches and palazzos that were sprouting up in Rome were waiting to be filled with artwork. The Roman Catholic Church was in search of religious paintings that had advanced out of the mannerist style of unrealistic distortion of proportions.  Caravaggio had a unique naturalistic style incorporating dramatic lighting techniques that caught the attention of the Church who commissioned him.  He created multiple religious works that depicted stories in the Bible.  In this one, he depicts a prophecy from the Bible that states that Jesus will crush the head of the serpent, which represents sin or the devil.

Although Caravaggio would one day be famous for his paintings, his fame was not achieved right away.  Rather, Caravaggio had gained the reputation as a violent instigator, getting into multiple brawls, murdering a man, and being jailed several times. This eventually led to a death warrant out for him sent by the Pope. Caravaggio’s paintings also stirred up controversy as his depictions stirred up social norms in the art culture.  In the painting Madonna and Child with St. Anne the public was shocked to see St. Anne depicted as old and wrinkled as it was seen as unhonorable.  More controversy concurred at the depiction of the Virgin Mary’s revealing bodice.

Caravaggio’s infamous life and his paintings were forgotten for many centuries.  It was not until the 20th century that his works resurfaced and gained much attention of the public.  Although he had been forgotten for many centuries, the impact of his paintings had a significant effect on the art culture.  The influence he had on the new Baroque style turned the attention away from mannerism and on a naturalistic style.  We can see the influence he had on artists in the generations after him, such as Rubens, Jusepe de Ribera, Bernini, and Rembrandt. Those who followed his style and were influenced most by him were called “Caravaggisti” or “Caravagesques”, as well as Tenebrists or “Tenebrosi”, from the technique called Tenebrism which refers to his use of light and dark.  Tenebrism was practiced long before Caravaggio, but it was he who made this technique definitive and dramatic in the darkening of the shadows and transfixing of the subject in a blinding shaft of light.

Caravaggio influenced many artists in his unique techniques and his paintings continue to inspire many today.  His dramatic paintings, such as the Madonna and Child with St. Anne, bring the Bible to life in their realistic depictions with his use of intense light and shadows, which eventually replaced mannerism.  Through the centuries Caravaggio was raised from the notorious fighter to the renowned artist.