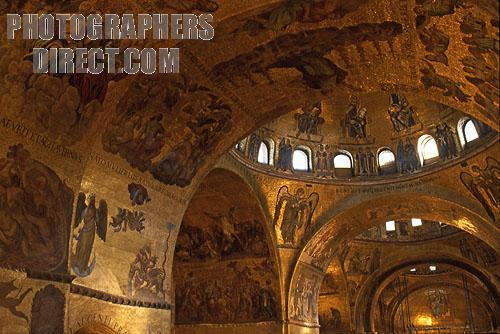 Religious art does not often take up scenes from the book of Revelation, as the complex and other-wordly imagery John describes are difficult to capture. Chapter 12 of Revelation offers scenes more easy to depict, and the story is one of escape from and triumphant victory over evil. The chapter describes the appearance of a woman in the sky clothed with the sun, standing on the moon, with a crown of twelve stars, and about to give birth. A seven-headed red dragon then appears and waits by the woman to devour her child, but when the child is born—a son who would rule the nations—God caught him up to heaven and sent the woman to a safe haven he had prepared. The dragon was defeated in a battle with Michael and his angels, and persecuted the woman in anger, but she was given wings to escape him; he poured water out of his mouth to drown her, but the earth swallowed it up, and he stormed away in rage to make war on the rest of her children—those who are called Christians.

Most of the figures in the chapter are easy to interpret: the dragon is Satan, and the child he is attempting to devour is Jesus Christ, the Son of God born of a woman who conquered death and rose victorious to sit at the right hand of God. But the woman is not so easily agreed upon. To Protestants she represents the people of God, while to Catholics she has four referents: Israel, the Church, Eve, and Mary (Akin). The last of these, Mary, is the culmination of the other figures and in her figure the roles of all the others are fulfilled. Revelation 12 shows her multi-faceted role in salvation history as the fulfiller of Israel’s ultimate mission, the Church, the New Eve, and the Queen Mother (Cross, Sri).

Catholics see Mary as the representative of God’s people in both the Old Testament and the New. She represents Israel as the summation of Israel’s mission, to prepare for the coming of the Messiah (Cross), and while Israel failed in her mission—rejecting and even crucifying her Saviour when he came—Mary humbly prepared herself to give birth to the Son of God. The woman in Revelation 12 therefore has twelve stars around her head, for the twelve tribes of Israel. Just as Mary represents Israel in their preparation for the coming King, she also represents the Church, the culmination of God’s plan of salvation for his people.

Catholics also see the New Eve in the Revelation 12 woman. Eve was the mother of all the living, but her disobedience brought death; Mary’s obedience brought life through the birth of Christ, so Mary is the mother of all Christians. Therefore the son of the woman in Revelation 12 is the “seed of the woman” spoken of in Geneses 3:15, rising to strike the serpent on the head and bring salvation to his people.

The portrayal of the woman in Revelation 12 is taken as grounds for seeing Mary as the Queen Mother in Catholic tradition. In Eastern tradition it was common for the mother of the king to be named queen rather than one of his many wives, and Catholic doctrine assimilated this cultural facet to see Mary as the Queen Mother of God. As the Revelation 12 woman is portrayed as royalty, Catholics use this as a biblical basis for seeing Mary as royalty, with the right even to command the Son she bore—God himself (Calvin).

The Basilica di San Marco presents the account of Revelation 12 in a mosaic set high on the wall amongst many other biblical scenes. Depictions of the woman in Revelation as a part of the chapter 12 narrative are not common in art, but references to it abound in portrayals of Mary, where she is often portrayed standing on a crescent moon with twelve stars around her head like the Revelation 12 woman (Guzik). As Revelation 12 captures the entire story of the history of redemption in one symbolic summary, Mary to Catholics in herself contains a summary of the history of salvation.