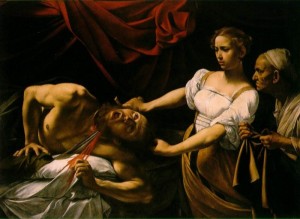 Any piece of art by Caravaggio seems to be a study in paradoxes. The religious nature of his art is coupled with the violence of his own character; venerated biblical figures have the faces of commoners and even a prostitute used as models; and lofty spiritual meaning is combined with stark realism. But yet another layer of paradox is added to Caravaggio’s painting Judith Beheading Holofernes by Catholic tradition, which combined the image of Judith as warrioress with the gentleness and meekness of the Virgin Mary to view Judith as an Old Testament prefiguration of Mary.

In the apocryphal account, Nebuchadnezzer has commissioned his general Holofernes with the task of either conquering or destroying the nations that refuse to worship him. While Holofernes is camped outside the city of Bethulia, intending to starve the city into submission, the wealthy widow Judith devises a cunning plan to bring about the city’s salvation. She dresses in the fine clothes and jewels she had worn when her husband was alive and goes out to the enemy camp with her maid. She asks the guards to take her to Holofernes and tells him that he is God’s instrument to bring judgement on Israel, and she can provide information to aid him in fulfilling this purpose. Holofernes, already lusting for Judith, allows her to stay in the camp, and every night she goes out to the edge of the camp to pray with her maid. After a number of days the general invites her to a banquet with him, expecting to sleep with her afterwards, but late into the night when he lay on his bed unconscious from too much wine Judith took his sword and hacked through his neck. She and her maid quickly escaped, bringing the head to Israel’s leaders with the news that the army would be easily defeated without the leadership of their general.

Judith came to be identified with Mary in Catholic tradition as her prototype, as Mary came to be seen not only as gentle mother but as victorious warrioress against the wiles of Satan. Both women conquered evil through their chastity, Judith as a pure widow and Mary as a virgin mother, and were used by God as instruments of protection against the enemies of his people (Cross). Catholics emphasised the purity of both to the point of adding to the original accounts—Judith became a virgin rather than a pure widow in some versions of the story (Migiel and Schiesari, 43), while the immaculate conception of Mary was formulated by Catholics to claim that she was conceived without original sin. Mary came to be so closely identified with Judith as the culmination/fulfilment of the saving figure Judith presented that phrases from the book of Judith were even adopted for liturgy for Mary feast days (Migiel and Schiesari).

Caravaggio’s rendering of Judith brought even more meaning to her story for the contemporary viewer through his use of intense realism, intended to make a deep impression on the viewer by “destroying the space between the event in the painting and the people looking at it” (Johnson). He initiated the innovative technique of absorption, capturing the scene at the acme of action when all of the figures are completely absorbed in their thoughts and actions and all elements of the painting are caught up in the action (Wullschlager). The Church, following the Council of Trent’s mission to revive religious art as a tool for both instruction and creating religious devotion, recognised that Caravaggio’s art had great emotional appeal to the masses—the common people loved his paintings because he had the marvellous ability to draw them into the emotional drama and also make it personally relatable to them by portraying his figures as commoners (Johnson). Yet at times the Church found Caravaggio’s work to be too real, claiming that he “crosses the borderline between the sacred and profane” (Johnson).

The Church had no qualms with Judith Beheading Holofernes, however. Caravaggio captured the moment of the most intense action, when Judith is absorbed in her task of sawing through Holofernes’ neck, portraying the deep faith that allowed her to perform an act of bloody violence without wavering. Holofernes’ face evinces the twisted anguish of a man passing from life into eternal death, presenting to the viewer the reality of damnation for the wicked. Those seeing the painting could not help but desire to possess the strong faith of Judith, the purity and devotion that made her a fitting prototype for the Virgin Mary.